1st Nebraska’s next performance will be a concert/clinic at the Strategic Air & Space Museum in Ashland, NE on April 16, 2016 from 10:00-11:00 am. Our appearance is in conjunction with the museum’s “Music and Science” day. The clinic portion of our program will demonstrate how brass instruments produce sound, the effect that valves and slides have on pitch, and how the size of instruments affects sound.

The concert portion will feature music form our 2016 program including “Soldier’s Chorus from Faust,” Hunter’s Chorus from the Rose of Erin,” and “Omaha Guards Waltz. We’all also play several Civil War favorites including “When Johnny Comes Marching Home,” “Dixie,” and “When This Cruel War Is Over.”

Yesterday I traveled to Des Moines to purchase a vintage Moses Slater TARV (top-action rotary valve) E-flat Cornet for use in our Living History Civil War band. The E-flat cornet is the main melody instrument for a Civil War band and its highest pitched voice.

The cornet was formerly owned by Steve Sprague, leader of the Liberty Band of Iowa who had the horn fully restored and buffed to a like-new shine. 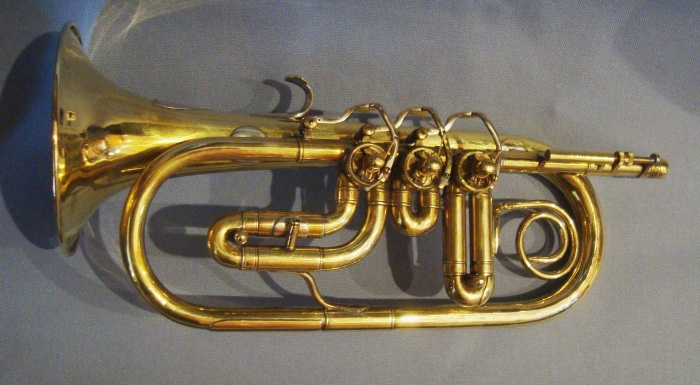 Note the unusual valve action on the horn. Modern valves are upright pistons activated by depressing a button on the valve top. Here, the rotors are activated by the levers at the top of the instrument.

Moses Slater, manufacturer of our “new” cornet,  was born in England in 1826, immigrated to the United States, and settled in New York City. He joined Stephen Gordon, and later Robert Martin to manufacture musical instruments, finally establishing his own firm. Slater died in 1899, but his firm continued to operate until 1920. (Musical Instrument Makers of New York, pg. 144)

Our goal is to outfit the entire 15-piece band with period instruments so that we can authentically recreate the look and sound of Civil War bands.