This morning (November 7, 2016), FedEx brought our newly purchased Boston Musical Instrument Manufactory SARV B-flat Cornet. The instrument was produced in the 1870s based upon patterns E. G. Wright used during the Civil War. It has Side-Action Rotary Valves, a very popular design for brass instruments of the period, and was played valves-up with the first finger of the left hand nestled in the finger crook.

The gentleman who sold it to us had played the cornet for several years but no longer had a use for it. You can tell just how much he valued the instrument by it’s great condition. He told me the story of how he acquired the cornet: “I bought it from the original owner’s grandson. He called me one day and said ‘I have a clarinet.’ I asked him if it was wood or metal, he said metal, and I told him it wasn’t worth anything and to chuck it. LOL He showed up a few months later with the cornet and I realized I had only ever seen one in a museum. After he passed his widow sold me the horn.”

The instrument comes with its original mouthpiece and leather case. We’re so proud to own this beautiful cornet, and will put it into use early in 2017. 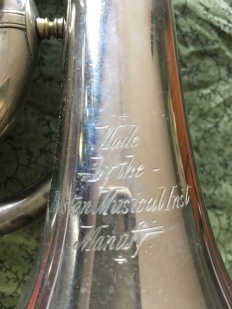